In “Media Manipulation and Disinformation Online”, Alice Marwick and Rebecca Lewis discuss the role of memes in the current media landscape and society. Their focus lies on the manipulating effects of memes and how memes are used by far-right groups to increase visibility or attention for certain topics.

I’m definitely not a fan of far-right internet communities and their opinions. However, can’t more left-wing communities also be accused of “attention hacking” in politics? What about the memes they made about Obama and Biden? 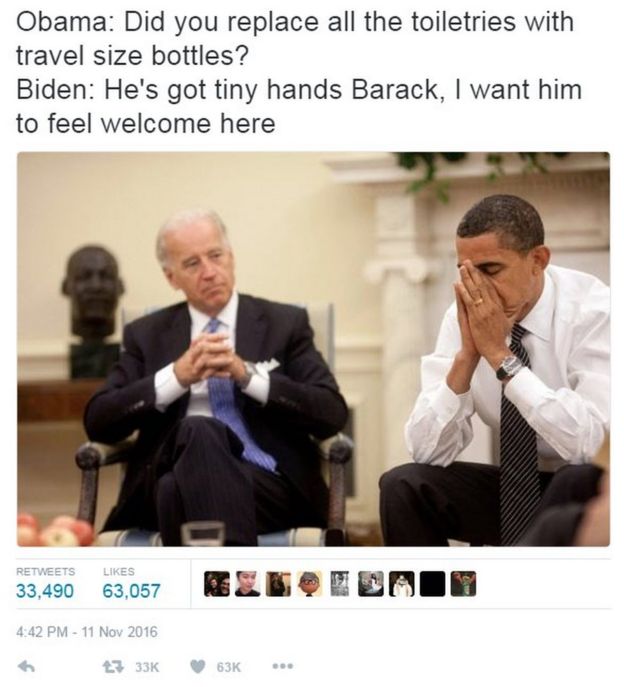 Of course, there might not have been deliberate attempts to spread disinformation. But these memes definitely made Biden and Obama more popular than ever, through humour platforms like Imgur, even among people who weren’t interested in politics. Most of the quotes used in the memes were “fake” – they were fiction – but they worked. It even got to the point where Biden shared his favourite memes about himself and Obama with the world. “In essence, they’re all true”, he said to The Hill earlier this year.

I am not surprised about this effect. Memes are extremely “shareable” on social media and go viral easily. More easily than informative, well-structured background articles on politics, at least. They’re catchy, you can “consume” them in a blink of an eye and you don’t even have to click on a link.

I think we should start realising that memes in themselves are not just funny images showing some fiction. They have the serious potential to form and influence public opinion, even in cases where they are simply meant as entertainment. It would be interesting to use meme formats to share more “objective” information. Although, I have to admit: I’m not sure if those could still be called “memes”.